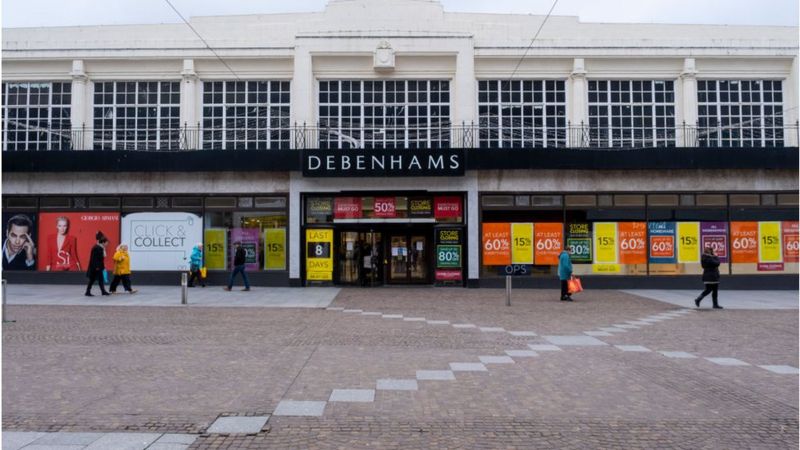 After the failure of last-ditch efforts to rescue the ailing store chain Debanhams has announced its closure.

It means all 12,000 employees are likely to lose their jobs when the chain’s 124 shops cease trading.

The news comes just hours after Topshop owner Arcadia fell into administration. Debenhams itself had been in administration since April.

Hopes of a rescue were crushed after the last remaining bidder, JD Sports, withdrew.

British department store group Debenhams is to be liquidated with the potential loss of 12,000 jobs, the country’s second major corporate failure in as many days, as the COVID19 pandemic pushes struggling retailers over the edge.

Arcadia is the biggest concession operator in Debenhams, accounting for about 5% of Debenhams’ sales, and its collapse made a sale of Debenhams more difficult.

Debenhams has struggled for years and was placed in administration for the second time in a year in April by its owners led by U.S. hedge fund Silver Point Capital.

The administrators will continue to trade Debenhams’ stores and online business to clear its current and contracted stocks. So what actually went wrong?

Experts say Debenhams has fallen behind with fashion trends over the last decade, a problem familiar to other mid-market High Street retailers such as M&S.

Maureen Hinton of retail consultancy GlobalData says it lacked products that differentiated it, which left it exposed when dynamic new brands, many of them operating purely online, started breaking through.

“Back in the 1990s they had Designers at Debenhams, where designers like Ted Baker or Jasper Conran would do in-house ranges for them. That was a good differentiator but they never moved on.

It made it very hard to compete against newer fashion retailers such as Primark, Boohoo and Asos, which also branched into other areas that Debenhams did well, such as beauty.

Over the years, Debenhams expanded at a rapid rate. In 2006 it announced plans to double its number of stores to 240 and was opening new shops as recently as 2017.

At the same time, shopping habits shifted and consumer spending was squeezed – firstly because of Brexit uncertainty, and then by the pandemic.

Debenhams was left with many underperforming shops which came with high costs, including rising rents, business rates, wages and maintenance.

Those liabilities got harder to cover, as revenue began to fall and the retailer booked a record £491.5m loss in 2018.

APPAREL EXPORTS TO RISE AGAIN AS BIDEN JOINS AS PRESIDENT?

@adidas TO MAKE MORE THAN 60 PERCENT OF ALL PRODUCTS WITH SUSTAINABLE MATERIALS https://t.co/GvjQrMObZS #BRANDS… https://t.co/3HKx8wHXhn