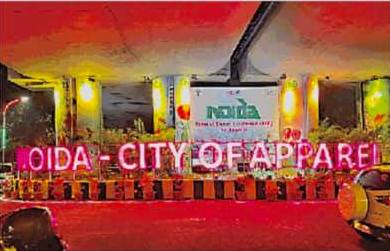 Visitors to the city from the Delhi side via Link Road will now be greeted with a mural that describes Noida as the “City of Apparel”.

Ritu Maheshwari, the Noida Authority CEO, inaugurated the mural in Sector 14A.

Noida, which has around 1,500 garment exporters operating out of its special economic zones, has been a textile hub for long, but was awaiting a formal recognition from the authorities.

“Noida had already been recognised as an apparel city in the one district, one product programme of Uttar Pradesh. Now, we have this mural to highlight the same,” Maheshwari said.

The inauguration of the mural came days after the Union ministry of commerce and industry designated Noida as the “Town Of Export Excellence For Apparel Products”. “Noida has been a textile hub, but we were not recognised nationally for this.

The Uttar Pradesh government had assigned us the tag of an apparel city, but the new mural at the Noida gate makes it a matter of pride for us,” said Rajiv Bansal, national secretary at the Indian Industries Association (IIA)

“The input costs have been rising rapidly and that affects the exporters.

Some subsidies should be considered for the garment industry because we are among the worst-hit by the pandemic,” Bansal said.

HK garment manufacturer to invest US $ 20 Mn in India