The Union budget is on its way and the apparel exporters certainly have some serious concerns and requests. One of the top priorities for the industry is to control the rising raw material cost which is giving sleepless nights to manufacturers. The industry calls for immediate attention of the Government on adopting ways to control the prices by imposing ban or ceiling on cotton exports from India as this is giving undue advantage to the neighboring countries. Along with this industry wants that the import duty on cotton yarn should be removed so that prices can come back to normal.

Ever since the pandemic has come in the dynamics of apparel manufacturing has also undergone big change, however, along with the challenges a lot of new opportunities are knocking the doors.

There is a sudden diversion of orders from China but exporters are not able to cash on this opportunity because of liquidity issues and challenges that exist because of delay in reimbursements and incentives.

The raw material fluctuation has stopped the credit cycle in buying of raw materials and now manufacturers have to pay in cash to buy raw material which requires good cash inflow and timely payments.

All these problems have posed a serious threat to competitiveness of India’s apparel export sector.

Team PERFECT SOURCING spoke to leading apparel exporters from India and got their feedback on the upcoming budget.

India is seeing a good flow of orders from the international market and there is no dearth of orders.

This is in fact a golden opportunity for India as a lot of orders are diverting from China to India, however, we are unable to operate smoothly. The reason being earlier we used to get higher RoSCTL (Rebate of State & Central Taxes and Levies) rates and that has come down drastically, moreover, the incentives and reimbursements are delayed because of which we are facing liquidity issues.

Our only humble request to the government is to prioritise the MSME apparel sector and increase ease of business. The incentives and reimbursement should be made on time so that future orders are not delayed. There should be a ceiling on cotton exports so that the prices of yarn and cotton fibre remain stable so that we can quote the buyer accordingly.  By the time we are given orders by the buyer the prices of raw material undergo a change. Interest subvention scheme has been stopped for a long time and that should be restarted. The Government should give us priority as apparel export sector is the only sector which gives so much employment and that too with a minimum period of training which is not possible in any other sector.

In my opinion interest subvention scheme should be restored and import duty on cotton yarn should be removed so that the prices can come down. Also, an imposition of export duty on export of cotton yarn after threshold limit should be made to ease the supply of yarn in domestic market as it creates a lot of hurdles for exporters. I would suggest creation of price regulatory mechanism to check the unreasonable price hike in raw materials in the upcoming budget.

We expect ban on raw cotton exports to our competitors at the cost of losing competitiveness in our industry or at least it should be regulated by imposing tax on exports of raw cotton likewise cotton yarn and Fabric exports also needs to be regulated. Also, we expect that the cotton import duty should be lifted so that manufacturers get a level playing field. Interest Equalization scheme should be continued for another two years at least.

The Knitwear Board should be created in Tiruppur either with an attached R&D facility (being the Capital for Knitwear production of our country.) For labour housing incentive and schemes like giving IT benefits to those Industries who build houses to house their labours should be devised. It is also important to make amendments to the available housing subsidy schemes to support the housing projects taken up in the Industrial clusters like Tiruppur.

With two major schemes the PLI & MEGA PARKS already being announced, and GST issues out of the purview of Budget, I am not expecting any major announcements in the budget except a revised TUFS scheme and measures to stabilise the soaring raw material prices.

My only request from the Government in upcoming budget is to offer some special packages or schemes for the MSME exporters as they are the ones who are most affected by the adversities of the market whether due to pandemic, rising raw material costs or changes in interest rates or reimbursement delays. The process of RoSCTL reimbursement is still very tedious and long which puts a strain on functioning of small and medium sized exporters who face liquidity crunch and are unable to process the orders further. We have to take a holistic approach towards the growth and development of apparel exports sector and then only we can achieve the targets in garment exports. Our sector should get priority. 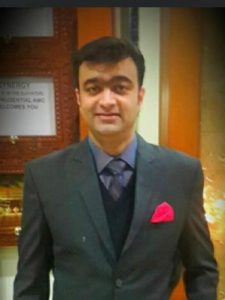 Most important aspect is inflating costs of all raw materials right from cotton to viscose to Polybag and paper. Our neighbours are taking undue advantage of the rising costs and this should be controlled by the Govt. by putting a ban on export of cotton yarn until its prices return back to normalcy. GECL was increased to 30% but with no benefit as whoever availed the 20% during last lockdown will only be entitled for 10% this year. This should not be merged with last year sanction.

Textile and Apparel Industry is one of the pillars to transforming India as it caters for two most important aspects we have been striving towards – Make in India & Employment for All.

Textile and Apparel Industry can go all the way in ensuring that both these goals are met. Our expectations from the upcoming budget :

I would like to take this opportunity to thank the Government for the PLI Scheme for textiles specifically aimed at boosting the production of man-made fibre / apparel and technical textiles. However, if the cap on minimum investment is brought down it will help many more to participate. Since MSME in Apparel sector constitutes a larger part of the Industry, this cannot be ignored.