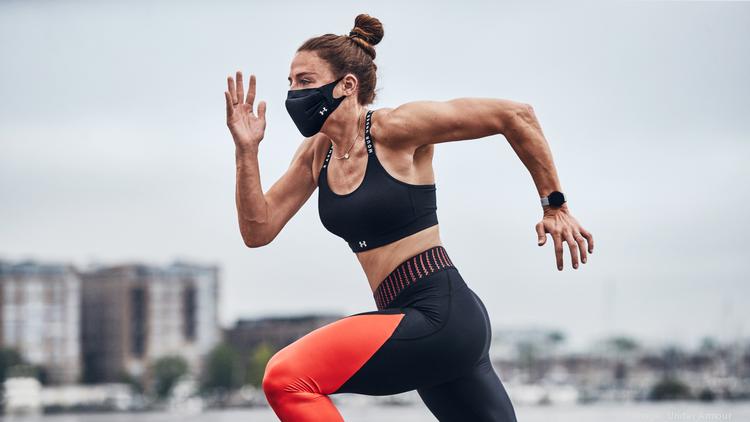 Under Armour recently launched a new performance-focused face mask seeking to make exercise in gyms and in groups safer for athletes without restricting their breathing. Health officials widely encourage the wearing of masks to help prevent the spread of Covid-19.

In announcing its new product, Under Armour showed some local and national athletes wearing the Sportsmask while exercising. They include Baltimore-based basketball program Team Thrill, lacrosse midfielder Taylor Cummings and NFL wide receiver Deonte Harris, a Baltimore native who most recently played for the New Orleans Saints.

The performance mask is another example of how the sportswear company is all-in on products made specifically for athletes, compared to other brands like Nike and Adidas, which have focused more heavily on casual and more fashionable apparel known as athleisure wear. Prior to the onset of the pandemic, Under Armour (NYSE: UAA) was losing market share in North America, its biggest region, as more consumers have gravitated toward athleisure over performance apparel. In light of the global health pandemic, CEO Patrik Frisk said last month he expects the company could see a boost from people focusing on health, fitness and wellness at home. Dick’s Sporting Goods, Under Armour’s biggest wholesale partner, has said the same.

The new UA Sportsmask was developed by Under Armour’s innovation team developed shortly after the company began manufacturing regular face masks, as well as face shields and other personal protective equipment (PPE) for health care and community organizations in mid-March.

The new UA Sportsmask is made up of three layers; Closest to the face is a stretchy fabric called UA ISO-CHILL, intended to feel cool against the skin. It is treated with anti-microbial technology called PROTX2, which inhibits growth of bacteria on the mask.In the middle is open-cell foam, a breathable material designed to let air through but not moisture and sweat. On the outside is spacer fabric, which Under Armour describes as light and soft with air pockets for structure to keep it off the mouth and nose, creating better airflow.

According to a release from Under Armour, the anti-microbial PROTX2 has been shown in laboratory tests to “destroy Covid-19” and is currently being reviewed by the U.S. Environmental Protection Agency to confirm its effectiveness in the new mask.

UA Sportsmask is also water-resistant and reusable. It is held in place with stretchy ear loops and includes a moldable nose-bridge to keep air from going up and fogging glasses. It also has side panels for additional coverage.

Under Armour is selling the masks for $30 online.  Within an hour of launching, the product was sold out online. But Frisk said in a tweet that more will be available come July.

PVH To Drop Out Of Calvin Klein High-End Collection