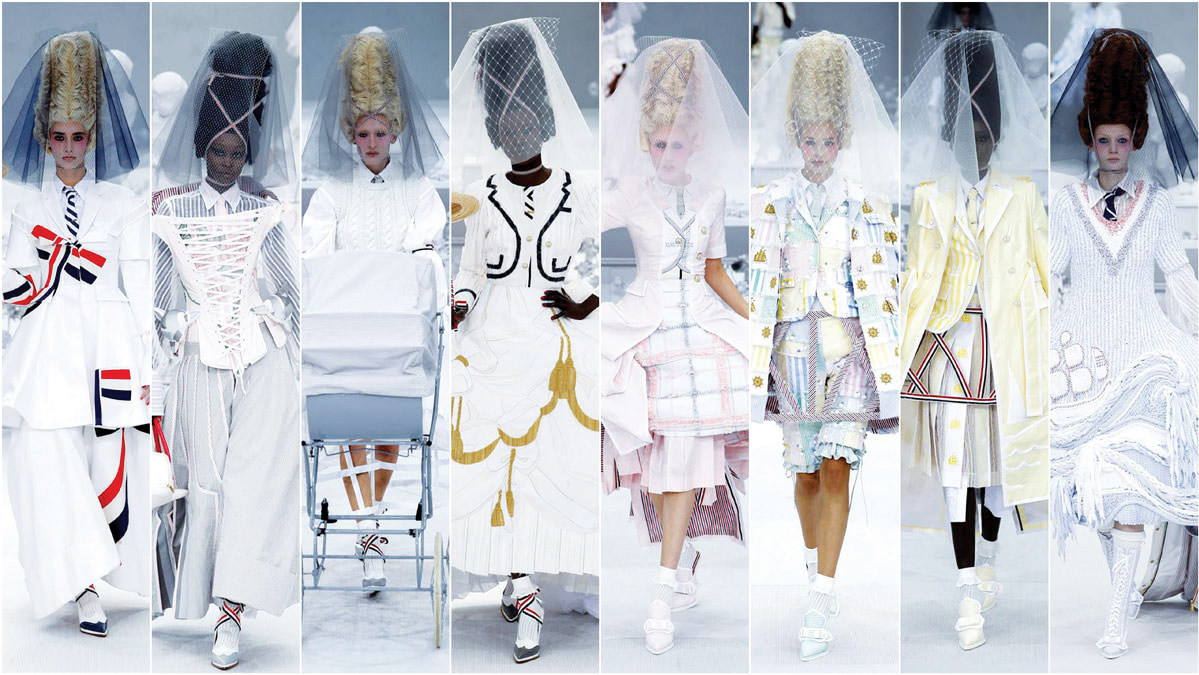 Paris Fashion week held on this September 2019 indicated an end of street wear and evoked the 18th century. Even street wear’s main man, the American Virgil Abloh, rolled his clock back putting Gigi Hadid in a trailing pink puffball gown and another model in a zipped raincoat worn like a cape. Crinolines and feather-light side hoops turned up in Jonathan Anderson’s Loewe show almost as if they were leisurewear. Van Noten, who took Stanley Kubrick’s classic 1975 film about an 18th-century Irish rake as the inspiration for his show with veteran creator Christian Lacroix.

The Belgian, known as the King of Prints, said he had to tone down the original acid colours of historic patterns that caught his eye. The big names and highlight of the show are:

It was the hand-knit sweaters from his grandmother and mom that inspired Altuzarra for this spring. The crochet tops and dresses mimicked the bedspreads handmade by the designer’s grandmother. The shirt dresses were inspired by the striped shirts worn by Altuzarra’s father. His mother’s afghan doilies and granny-square blankets were reimagined as colorful sleeveless tops. Given fashion’s ongoing sustainability conversation, it was an important reminder that the truly special wardrobe pieces can and should be able to be pass down and treasured for generations to come.

Haider Ackermann has long mastered the art of androgynous style—and the designer’s spring 2020 collection explored suiting, shorts, and red carpet-worthy gowns. The extreme cut-out tops and jackets sans anything underneath mirrored some of the more daring red carpet style as of late.

JW Anderson explored the ethereal side of his Loewe woman for spring 2020, alluding to patrician elegance. Loewe’s craft and construction is always at the focal-point of Anderson’s collection, yet he creates pieces that real women want to wear. This season his nomadic woman gets in touch with a softer, romantic side, by way of guipure, chantilly and marguerite lace in the form of sheer dresses with rectangular pannier skirts, a tunic and coordinating pants, as well as a babydoll gown.

Isabel Marant brought booty shorts back for spring 2020. The French designer looked to a colourful mix of ultra teeny, ultra short shorts, styled with a myriad of strong-shouldered jackets. The colours were bright with a mix of stripes, florals, and muted tie-dye prints thrown in, too.

Titled ‘Meteor Shower,’ the collection featured the large holes left in leather pants, tops, blazers, and even the brand’s newest bag. According to show notes, the cosmic theme was meant “to illustrate a woman’s power, to show that her spirit is indestructible by natural forces.” Abloh’s signature streetwear pieces were still there (albeit with a few extra holes), but it was the hoop-embellished necklines, buttery leather separates, and colorful gowns that stood out most.

She’s been on hiatus with the onset of streetwear and ‘80s power shoulders, but designer Natacha Ramsay-Levi brought her back today. The designer called the collection, “An essential manifesto for the Chloé woman: a fundamental vision of femininity anchored in reality.” She wears suits with interesting, sexy tops underneath, floral bustiers and floral dresses with cool leather belts.

Galliano went back, way back—think two world wars ago—to garner inspiration for Spring 2020. There are references to Red Cross nurses, army jackets, his own take on camo, sailors and soldiers of the fashion kind.

Alessandro Dell’Acqua is back in the colour game after a previous season of all-black looks. That meant explorations of red with burgundy, preppy pink with green, sea foam with black—and a reminder that sometimes an LBD is all a girl needs. Color seemed to be the main through line, though, on a generally haphazard look at a woman’s wardrobe for the season.