Canada Goose, a clothing brand known for its fur-trimmed parka jackets, has announced that it is to end the use of real fur in its products by the end of 2022.

Canada Goose, founded in Toronto in 1957, has long been a target of the anti-fur movement.

The animal rights organisation Peta has campaigned for it to stop using fur for 15 years, and staged protests outside the company’s New York store in March.

In the UK, two activists sustained a 15-month protest outside its Regent Street store in London and the Leeds store Flannels was targeted in 2019 for stocking Canada Goose. 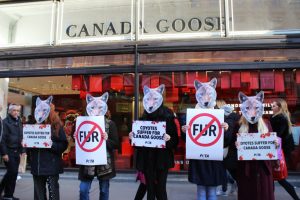 “Peta and its affiliates are suspending their international campaigns against Canada Goose today, after years of eye-catching protests, hard-hitting exposés, celebrity actions and legal battles, as the company has finally conceded and will stop using fur – sparing sensitive, intelligent coyotes from being caught and killed in barbaric steel traps,” the organisation said.

“Peta will now re-engage the company to push for an end to its use of feathers, which geese and ducks continue to suffer for.”

This was framed as an effort to be more sustainable, rather than in response to the increasingly vocal anti-fur campaign.

The decision to stop using fur entirely has been presented as part of the same trajectory.

It is likely the company was also influenced by the fact that fur is now unfashionable.

London fashion week banned fur from its catwalks in 2018, and hundreds of fashion brands including Gucci, Prada and Versace are fur-free. 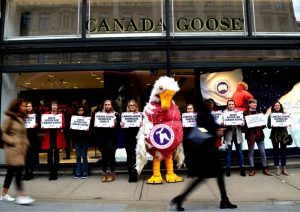 Nor is the fur coat any longer a status symbol.

The Queen and Kim Kardashian stopped wearing new fur in 2019, and Carrie Johnson, the prime minister’s wife, has described anyone buying fur as “really sick”.

The anti-fur movement may get a further boost.

The UK government launched a public consultation in May to gather opinions on the sale of the material.

Depending on the feedback, there could be an outright ban on sales of fur products nationwide.