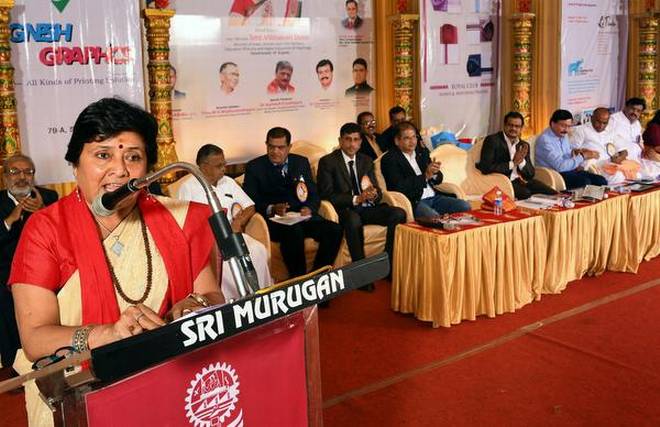 The two-day-long Sourashtra Industrial Trade Conference’, hosted by Sourashtra Chamber of Commerce, concluded at Madurai. Addressing members of Sourashtra community on the first day of the two days event, Gujarat Minister of State for Women and Child Welfare, Education (Primary and Higher Education) and Pilgrimage, Vibhavari Dave, emphasized that textile and silk industry need to be encouraged to reach greater heights and there were many members of Sourashtra community who had been successful. “Gujarat would help them in developing relations with other business communities,” she added.

The Minister expressed hope that there would be several collaborations and memorandums of understanding between businessmen of Madurai and the organisers of Vibrant Gujarat 2020 summit. She said Prime Minister Narendra Modi and Home Minister Amit Shah would steer businessmen from Tamil Nadu in the right direction.

M. V. Muthuramalingam, Chairman of Velammal Group of Institutions said, if the BJP wanted to make inroads in Tamil Nadu, it must set up functional and long-lasting industries to improve commerce here. “It will help in combating communal clashes,” he added. Former Vice-Chancellor of Saurashtra University, Rajkot, Kamalesh P. Joshipura and Madurai South MLA S. S. Saravanan was also present on the occasion.

Tribute to Sushmaji, who passed away at 67.

SoHo in Spotlight for Menswear

Which Fashion Brands Scored the Best on Transparency Index?