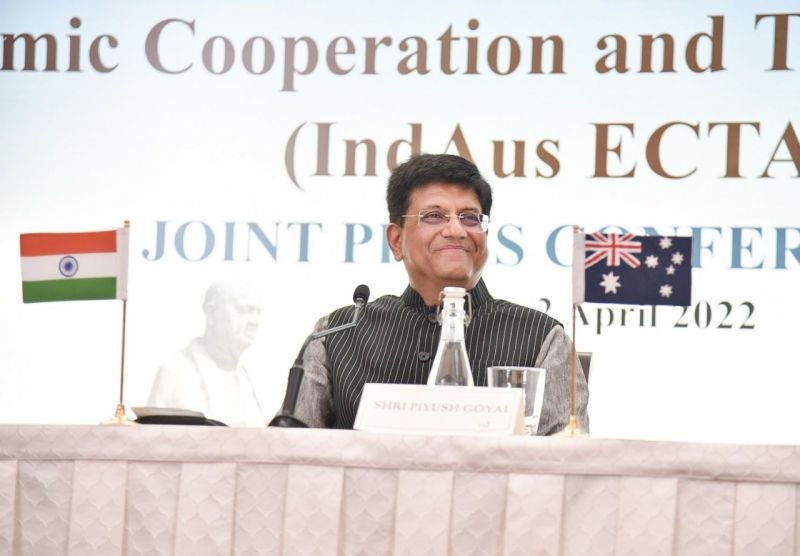 This Economic Cooperation and Trade Agreement (Ind Aus ECTA) will provide zero-duty access to 96% of India’s exports to Australia including shipments from key sectors such as engineering goods, gems and jewellery, textiles, apparel and leather.

The pact is expected to boost bilateral trade in goods and services to $45-50 billion over five years, up from around $27 billion, and generate over one million jobs in India, expressed Piyush Goyal, Hon Textile and Commerce and Industry Minister.

The agreement will also give about 85% of Australia’s exports zero-duty access to the Indian market, including coal, sheep meat and wool, and lower duty access on Australian wines, almonds, lentils, and certain fruits.

It is the first Free Trade Agreement (FTA) that India has signed with a major developed country in over a decade. In February, India signed an FTA with the UAE and is currently working on FTAs with Israel, Canada, UK and the EU.

The agreement was signed by Commerce and Industry Minister Piyush Goyal and Australia’s Minister for Trade, Tourism and Investment Dan Tehan in a virtual ceremony witnessed by Prime Minister Narendra Modi and Prime Minister Scott Morrison.

Officials pointed out that a number of Indian exports currently face a tariff disadvantage of 4-5% in many labour-intensive sectors relative to competitors — those with FTAs with Australia — such as China, Thailand, Vietnam. Removing this barrier, officials said, could enhance merchandise exports significantly.

India has, however, excluded a number of Australian products from tariff reductions under the agreement to protect “sensitive sectors” including dairy products, wheat, rice, chickpeas, beef, sugar, apples, toys and iron ore.

Australia is set to benefit from zero-duty access on coal which currently accounts for about 74 per cent of Australia’s exports to India and currently attracts a duty of 2.5 per cent.

Zero-duty access for Australia is set to increase to cover 91 per cent of its exports by value and over 70 per cent of India’s tariff lines over 10 years.

The agreement also includes strict rules of origin to prevent any routing of products from other countries and provides for a safeguard mechanism to address any sudden surges in imports of a product.

Recent years have seen remarkable growth in the trading relationship between India and Australia, fuelled by the many complementarities between the two economies.

At the 17th India-Australia Joint Ministerial Commission meeting on 30 September 2021, Ministers Tehan and Goyal formally re-launched CECA negotiations and reaffirmed their commitment to conclude a CECA, including to reach an interim agreement by December 2021 to liberalise and deepen bilateral trade in goods and services, and to conclude the negotiations on a full CECA by the end of 2022.

An interim agreement the Australia-India Economic Cooperation and Trade Agreement was signed by Ministers Tehan and Goyal on 2 April 2022.

There were nine rounds of negotiations before both countries decided to suspend negotiations in September 2015, pending the outcome of other multilateral regional negotiations.

In June 2020, as part of the Joint Statement on a Comprehensive Strategic Partnership between India and Australia, Prime Ministers Morrison and Modi decided to re-engage on a bilateral Comprehensive Economic Cooperation Agreement (CECA) while suitably considering earlier bilateral discussions, where a mutually agreed way forward can be found.