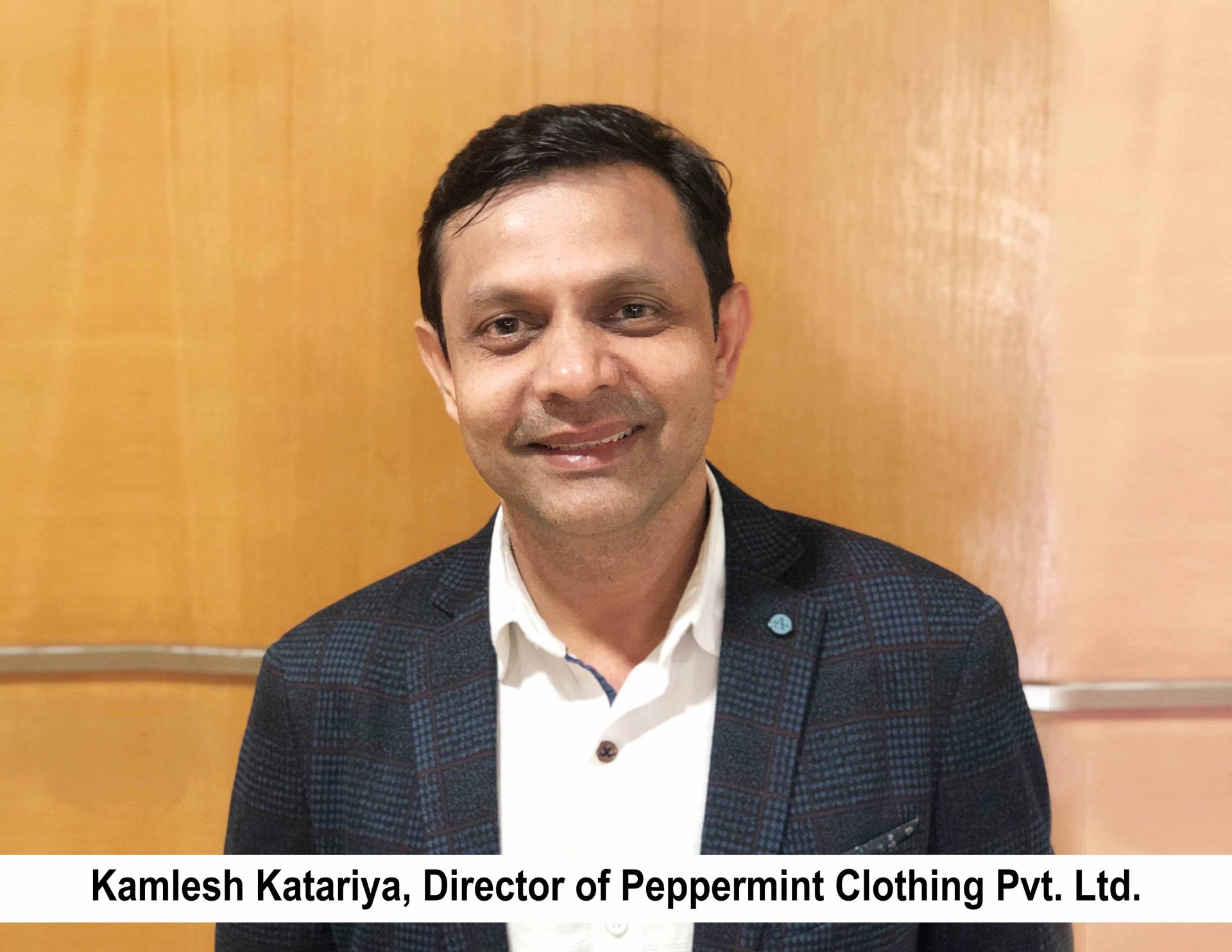 Peppermint Clothing which was earlier known as Crystal Apparels started with a humble beginning in the year 1985 as a job worker. However, determination and constant persuasion to make a mark in apparel sector through its high quality products, wide range and updated technology helped the company in achieving new benchmarks within a few years.

Peppermint manufactures fashionable readymade garments for the girls in the age group of 1 to 15 years and has the capacity of manufacturing up to 1.25 lakh garments per month.

Now with an annual turnover of around Rs 100 crores; presence in 1000+ multi brand outlets (MBOs); 250+ Shop-In-Shop stores, e-commerce websites and exclusive Peppermint Stores the company has come a long way and is still growing. In an exclusive tete-e-tete with Kamlesh Katariya, Director, Peppermint Clothing P. Ltd we came across interesting journey of the company that started with just four manual pedal sewing machines. The group has been conferred with “Best Brand – Kids Wear Category” by Shoppers Stop for three years and has also won the APEX award from CMAI in 2018.

Reminiscing the earlier days of business and journey, Kamlesh Katariya said, “Initially business came in the form of job working from a well-known retailer that gave us the experience in production and in some years, we were able to make our own designs / samples and sell them through participation at Mumbai based domestic exhibitions.” The exhibitions and networking paved new ways for the company as new retailer network across the country was set up and they were also able to sign up booking agents.” He further informed that by 1998 the company had added 80 pedal machines.

“After a lot of deliberation, we bought just one motorised sewing machine. The desire to make production easier and faster, led us to do a research and get a hands on experience with different pressure foots and folders,” averred Kamlesh. The first step taken by the company in upgrading technology proved to be a big success and encouraged the company to invest majorly on machinery for the first time. “We bought 100 motorised sewing machines and by 2007 we had a production house with 300 sewing machines,” he informed. For Kamlesh, a dream came true in the year 2002 when they opened first office in commercial capital of India, Mumbai.

“The office ensured our presence in the market and better customer service,” said he.
The brand name Peppermint also comes from a short story. “ We wanted to have trendy name for our brand which was getting popular and in the year 2006 “Peppermint” was officially launched a brand at JW Marriot, Mumbai,” shared Kamlesh. In the same year Crystal Apparel was renamed as “Peppermint Clothing Pvt Ltd. In the year 2007 Peppermint entered the ‘Large Format Stores’, signing up under the SiS format.

When the brand started getting popular there was a need to increase the production capacity and thus in the year 2009, the company took a big step by setting up state- of –the- art factory spread in an area of two acres at Baramati. Keeping abreast with the latest production techniques, the new factory was set up with an in-house computerised embroidery machines, laser cutting machine in the pre-production department, band knife and air floater tables in the cutting department.

Kamlesh added, “We bought our first spreader in the year 2013. Given the variety of fabrics we use, overcoming the so-called teething problems itself was a task.” “Perseverance paid off and led to the investment in a fully automatic cutter in the year 2018 from Lectra and seeing the results in 2019, we bought our second spreader,” pointed Kamlesh.

Technology from then has become a vital area for the company and constant investments in adopting the latest and specialised sewing machinery, right from the basic button attaching and button hole to the sophisticated auto pattern sewer machines the company has almost all the major machines placed.

While most of the companies had a bumpy ride ever since the GST was introduced Peppermint was able to sail strong and get Input Tax Credit for out of state purchase.

Looking forward in FY 2019-20, the company wants to maintain business volumes through its marketing strategies. “Peppermint is in talks with a mid-sized and region specific organised retail brand and the company’s focus will be laid on having more EBOs across the country which will help in building a stronger brand presence,” said Kamlesh. The in-house designing team of Peppermint is the core of their exclusivity. This coupled with total manufacturing facility being in-house, ensures that these exclusive designs are made at the most reasonable prices.

“We aim to be pioneers of delivering World Class Fashion of Export Quality at Domestic Prices and become a Rs.300+ crore company over a period of the next five years,”

The company has already expanded into new product categories by adding garments for teenage groups also. On the technology front the company is in the process of implementing SAP. While EBOs started on SAP from day one, the site map to get the entire organisation under SAP is under progress.

“We should be able to implement it by end of the current financial year. This will bring the entire organisation on a single platform and help in seamless connectivity and communication”, he shared. On the manufacturing front, The company is now in the process of implementing Real Time Production Monitoring System to track efficiencies at individual operator level.

On being asked how has manufacturing in Baramati a small town in Pune District helped the company in giving cost and high production runs he replied, “Traditionally Baramati has been known as the Sugar Bowl of India as a lot of sugar mills exist in and around. The vision of MP, Sri Sharad Chandra Pawar who wanted to enhance the socio-economic status of the region by encouraging non- polluting industries and women employment in the area a SPV in the name of Baramati Hi-Tech Textile Park Ltd was formed for manufacturing textiles and garments,” shared he. The park has taken advantage of the cluster development initiatives and today more than a dozen companies are operational in this textile Park.

These companies with the support of the Chairperson have cumulatively generated employment for more than 3000 people, 80% of them being women. The park has some very prominent brands and exporters as its members.

“The park is not only for very specific to the Garment Industry only and has famous companies like Immsofer (makers of Kinder Joy), Schenbeir Dynamic (Dairy), Piaggio Ltd (Maker of Vespa Scooter), Bharat Forge and many such industries. Due to the park there has been a steady growth in exports from the region”, stated Kamlesh.

Research says that a lot of companies have shifted a major part of their business from export to domestic due to problems in the export market and the evolving scenario of the domestic market.

However, for Peppermint, the scenario is different as even though they have complete set up as per international standards exports do not make a prominent share. “We did exports to the Middle East countries in the past but our focus has always been on the domestic market.

“The world talks about India today as the fastest growing economy and the increasing demand from the sector has been very encouraging for us,” asserted Kamlesh.

“We aim to be pioneers of delivering World Class Fashion of Export Quality at Domestic Prices and become a Rs.300+ crore company over a period of the next five years,” he said while concluding his interesting journey with Team Perfect Sourcing.