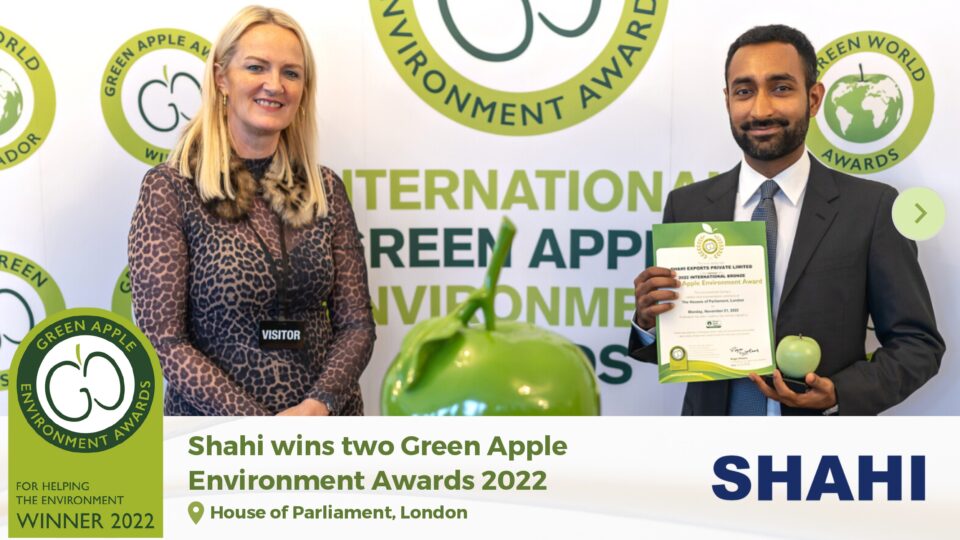 Shahi has won a silver award in ‘Water Efficiency’ for denim production and a bronze award in the ‘Carbon Reduction’ category for mitigating carbon dioxide emissions.

Instituted in 1994, the International Green Apple Awards are conferred by the UK-based Green Organization and receives entries from Governments, Ministries, and Regional Authorities as well as companies, organizations, and communities, across the private and public sectors across the globe.

This year close to 500 nominations were submitted.

Shahi Exports is a vertically integrated, diversified company with over 115,000 employees across nine states of India and over fifty factories and three fabric manufacturing units. Commenting on winning the global recognition, MA Prasad, COO of Operations, Shahi Exports said,

“The awards are a just recognition of Shahi’s meaningful interventions. Our denim production factories are equipped with best-in-class water efficiency technologies that help us recycle nearly 100 % water used during the process. In addition, we have achieved Zero Liquid Discharge, and through various green initiatives, we have created one of the most sustainable denim operations.”

The fashion industry accounts for 10% of global GHG emissions and 20% of global industrial-water pollution. Climate change is a reality, and India has committed to mitigating 1 billion metric tonnes of carbon emissions by 2030.