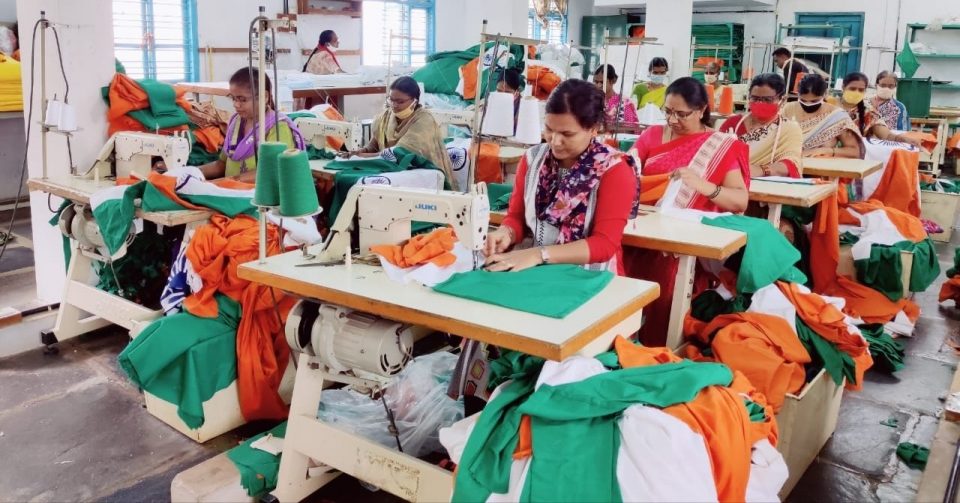 The 75th Independence Day preps are going in full swing and apparel industry is also part of it. On August 15, 2022, the country will become 75 years of independence and this year the Amrit Mahotsav of Independence is also being celebrated across the country.

Under the Amrit Mahotsav of Azadi, the government has started the Tricolor program at Har Ghar from 11 to 17 August to further enhance the feeling of patriotism among the countrymen.

The apparel manufacturers in Noida are engaged in production of making of national flags for the big day.

Nearly 20 cr national flags are being made all over India.

Noida Apparel Export Cluster one of the largest clusters for readymade garment is engaged making 50 lakhs flags for this eve.

“The UP Govt has given task of making 2 cr flags for the eve and 50 lakhs flags are being made by garment manufacturers in Noida. The fabric for flas is sourced from Surat and after the printing and laser cutting the sewing is being done in units. Manufacturers in Noida are tirelessly working on making flags for Amrit Mahotsav and we are proud of being a part of this celebration,” informed Lalit Thukral, President, Noida Apparel Export Cluster.

At the same time, in view of increasing the feeling of patriotism among the people, the administration will distribute a total of 3 lakh tricolors in Gautam Buddha Nagar district of Uttar Pradesh adjoining Delhi and they will be hoisted. With regard to this special campaign, every house tricolor program will be run in Greater Noida from August 11 to 17, in which the Greater Noida Authority will play a big role. The authority will distribute one lakh tricolor in Greater Noida and will inspire Greno residents to hoist it.

One lakh tricolor will be distributed among the residents of Noida

In fact,. In view of this, a mandate has been issued by the Chief Secretary Government of Uttar Pradesh, in which the Gautam Budh Nagar administration has got a target of distributing and hoisting three lakh flags. To make this campaign successful in Greater Noida, the authority has taken it upon itself. The authority has decided that one lakh tricolor will be distributed among the residents of Greater Noida.