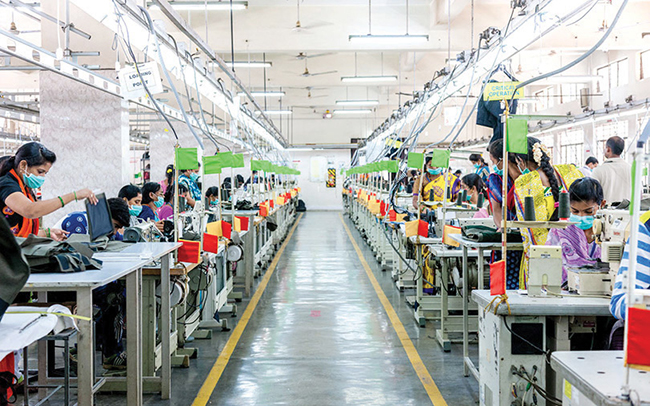 Indian textile and apparel industry has been through a lot in the recent past, be it because of the unsupportive Central policies or the quick gunshots like demonetisation and GST. Numerous exporters have reported stumbling profit margins and Gokaldas Exports is one such company. What made it even more tough for the exporter were its internal struggles. First, the acquisition by Blackstone Group in 2017, and then the sellout of 39.96% stake for Rs. 58.61 crore to Mathew Cyriac, the former Co-head of Blackstone’s private equity (PE) business in India.

Following the ‘done and dusted’ phrase, the company is all set to be back on the profit-making path, leaving all the dull moments behind. Marching ahead to make it a hit, Siva Ganpathi, MD of Gokaldas Exports shared the strategies of the company with Perfect Sourcing for the future growth. Notably, what make Siva the game-changer for the company are his skills and the experience he has by working in different industries over the years, be it Finance, IT or Telecom and that too world over.

Enthused by the expertise he has in spinning the money from businesses, Siva avers, “I have had the fortune of working in several different industries, running businesses across different countries, seeing business cycles and turning around underperforming businesses so new industry is not so much daunting and my experience in other industries is definitely an added advantage. I see tremendous intrinsic capabilities in terms of design, manufacturing, supply chain and customer relationships, which augur well for Gokaldas to be a leader in the apparel industry and serve its clients well.”

Well, Gokaldas Exports already has over 23 factories in and around Bangalore with a turnover close to Rs. 1,000 crore. The export company is now drafting fresh plans to reach new avenues of growth. Siva highlights these major areas for the firm’s future growth — Operational Excellency, High Efficiency, Working on Wastage, Attacking Supply Chain and Getting Right Quantity at Right Price and Right Time. He even mentions that work done on these areas of concern have allowed Gokaldas to mark an increase in productivity by 10% and a reduction in wastage too. “Even if we reduce fabric wastage by 1%, it can save us Rs. 10 crore and a 1% increase in productivity means saving around Rs. 80 lakh every month, so putting all these things in line results in big shifts financially,” he elaborates.

Additionally, as Siva understands the importance of retaining clients while operating any business, Gokaldas has worked hard and is doing the same even today to gain the confidence of the buyers post the exit of Blackstone. And to offer it clients with good order capacities. Siva tells us that the company has started looking outside Bangalore for cheaper land and labour. The company is eyeing space in Andhra Pradesh as well, and too at subsidised rates.

“We want to start building long-term capacities which will stand for next 10-15 years,” Siva strongly underlines. The one-year-old Managing Director is crystal clear on having not just world-class factories but also the units which are much ahead of time in terms of the way they function and perform. “It is important to work on systems/software so that the units work more effortlessly and that is why we would like to work on infrastructural expansion of the company in terms of management. We need tools that can handle order to cash, inventories, product management, so that everything is system-driven and the same process can be followed at all the units of GE.”

The company has even raised funds to automate and modernise units and will be investing Rs. 50 crore for the same in the next three years. Around Rs. 150 to 200 crore in capacity expansion would also be spent. The investments for the same will be made through capex outlay, internal accruals, equity debt and working capital will also be utilized, informs Siva who adds, “We would add machines that do multiple operations, reduce time and consume less resources like water and energy. For instance, instead of manual we can use laser machines for denims.”

Equal thrust is being laid on Training and HR which are an integral part of any organisation. “Attrition rate is a big challenge today, we have more than 20,000 people employed with different expectations and challenges, so we are also working on team engagement activities, managerial training, skill training and many more such things,” he underlines.

Being Niche is the Key

Siva believes that to be a winner in long-term, it is critical to compete in the right space, where we have niche, for example, in Europe it is tough to compete with Bangladesh as they have an FTA so we have to look at other products and business segments where we are not competing with them. “We have an edge in fashion as we have good source of cotton and viscose and we can deliver in shorter lead times, so that will be good for the company,” he adds.

Gokaldas has also enhanced its focus on products like work wear, uniform, technical garments and outerwear other menswear. The strategy is to tap categories where the UVR is relatively high and the competition is less for instance, fashion and value-added products. With plans in place, Siva expects that the company will achieve nominal growth of around 10 to 15% by next year.

“We have raised funds for the sameand will be investing Rs50 cron modernisation in next three years and around Rs150 to 200 cr for capacity expansion, the investments for the same will be made through capex outlay, internal accruals, equity debt and working capital will also be utilized,” informed Siva.

On being asked whether modernization reflect automation, he instantly replied, “See we would like to add machines that do multiple operations, reduce time and consume resources like water and energy. For instance instead of manual we can use laser machines for denims.”