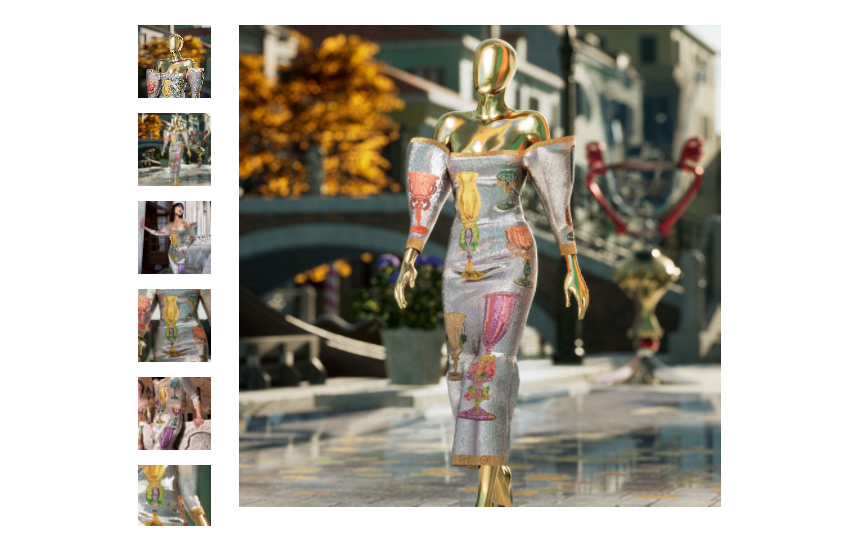 Sold alongside some physical couture items, the brand displayed and auctioned its digital ‘Collezione Genesi’ collection on the digital luxury marketplace UNXD.

Since the announcement of the collection, the Ethereum cryptocurrency rose 10 percent, making the collection worth 6 million dollars in total.

The collection, made up of five physical designs and four digital creations, was a collaboration with UNXD. It’s founder and chief executive Shashi Menon was the one to go to Dolce &Gabbana with the original idea.

With Dolce &Gabbana designing, UNXD created the virtual versions of the physical designs, including two versions of The Dress from a Dream designed in both gold and silver.

Other virtual items included are an emerald green man’s suit, called The Glass Suit, and a crown called The Impossible Tiara.

Dolce &Gabbana said that the crown was made from “gems that can’t quite be found on Earth”.

The Impossible Tiara was sold to an anonymous buyer called Pranksy for 99.99 Ether – over 350,000 dollars.

The record breaking sale has set Dolce &Gabbana at the forefront of the fashion NFT market. Cancelled in 2018 over offensive statements about race, sexuality and size – eventually reaching its climax when the brand released a video in China featuring a Chinese model eating spaghetti with chopsticks – Dolce &Gabbana seem to be moving forward once more.

Consumers plan to spend $997.73 on gifts, holiday items and other non-gift purchases